DEGREES OF FREEDOM: Varying Routes to Math Readiness and the Challenge of Intersegmental Alignment 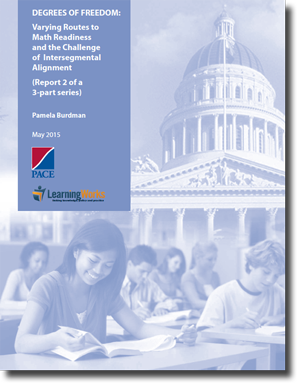 “After nearly 10 years of investment in improving remedial math success, the initiatives with perhaps the most promise are also the most controversial.”

DEGREES OF FREEDOM:
Varying Routes to Math Readiness and the Challenge of Intersegmental Alignment

But these experiments remain controversial among some mathematicians, who favor the traditional algebra-intensive math sequence. They are also out of step with the curriculum that high schools are newly implementing in connection with the Common Core State Standards, which also prioritizes two years of algebra. And, they have run afoul of some universities’ requirements for students seeking to transfer from two-year colleges, leaving community colleges wary of offering them to their students.

A new report, DEGREES OF FREEDOM: Varying Routes to Math Readiness and the Challenge of Intersegmental Alignment, sheds new light on the alternative pathways and obstacles to their implementation. The report recommends that colleges and universities collect evidence on the success of the new sequences, and base their policies on that evidence, rather than prematurely curtail them.

DEGREES OF FREEDOM: Varying Routes to Math Readiness and the Challenge of Intersegmental Alignment is the second in a series of three reports examining college math requirements in California and nationally. The reports were written by higher education policy analyst Pamela Burdman and co-published by LearningWorks and Policy Analysis for California Education (PACE).